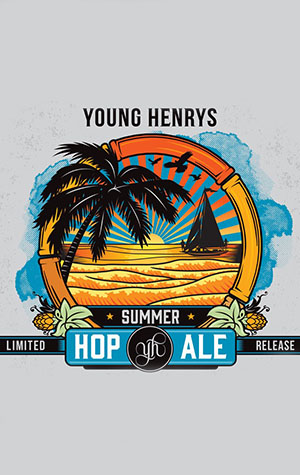 The Hop Ale was one of the earliest beers to come from Young Henrys and when it began it took the spot within the range as their not-exactly-IPA IPA: a little bit English influenced, a little bit American, loads of hops. After a couple of years, when the brewers had trouble sourcing their regular hops and determined that those they could get weren’t up to standard, they took the opportunity to give the Hop Ale a proper makeover, turning it into (a) a dark beer and (b) a more limited winter seasonal. Now they’ve released a companion piece, the Summer Hop Ale.

Having dry hopped the crappers out of it, the brewers have created something resembling a tropical fruit salad melange: mango, passionfruit, pineapple – all the best fruits are there. But despite such notable presence that’s all, somehow, not ended up as a sickeningly sweet solution, mainly because it’s been balanced on a tight malt base and comes with a finish that’s all dry and refreshing. When you wrap all that up in a surprisingly beefy 6.1 percent ABV package, the ease with which the Summer Hop Ale goes down, then demands to be downed again, could spell trouble for young players. Either way, with the beer scheduled to be around until March 2017, this summer at Young Henrys could be the best one yet.