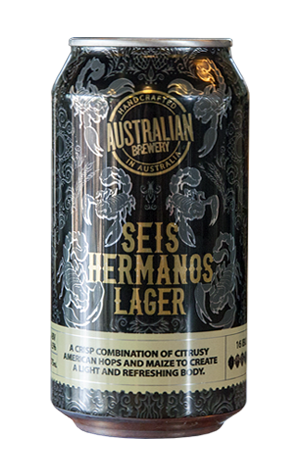 Since opening in 2010, The Australian Brewery hasn’t been afraid to put out the occasional beer in a style that beer geeks would have so little interest in that you'd be surprised if they noticed them at all. You’d gave to say that one of those is the Mexican lager, a beer that’s been around at the brewery since the early days, has always proven popular out at Rouse Hill and which even got a few runs through the canning line back when The AB was still the only small microbrewery to be packaging in such a way. Well, beer geeks take note: you’re about to see a lot more Mexican lager.

More or less the same beer has been repackaged as the Seis Hermanos (‘Six Brothers’, in reference to the brothers that own the brewery) lager and it’s being sent beyond the brewery bar. Well beyond, in fact: in addition to having nationwide distribution, export orders have been lined up for Singapore, China and the USA. The method in which it will greet the world is by way of some visually ornate cans, featuring Day of the Dead style artwork interspersed with scorpions and hop cones.

The beer that sits inside the slick wallpaper has an unexpected depth of body thanks to a combination of pilsner malt, maize and a touch of oats. To be sure, it’s still an un apologetically easy-drinking beer that’s not heavy on character, the Liberty and Tettnang hops giving it a subtle citrus kick while there’s effectively no bitterness to speak of. If you're looking for the world’s most exciting hop-fuelled beer, Seis Hermanos isn’t it. If you’re looking for a light, clean and balanced beer to reach for on a hot summer’s day, this could be what you're looking for.