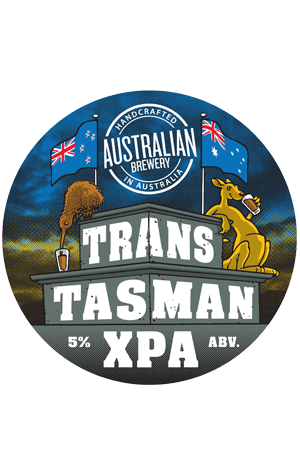 It’s not uncommon for an Australian brewery to release a commemorative beer around Anzac Day. What is unusual, however, is when that beer is actually brewed by a former Anzac. That's the case here, however, after ex-Rifleman Jamie Howie made the interesting career move from Australian Army to Australian Brewery, joining the team at Rouse Hill in late 2018.

Trans-Tasman XPA is the first beer he’s designed and the brewery’s first XPA too. Pale gold in colour and with aromas of citrus and tropical fruit, it uses four varieties of hops, Australian Galaxy and Vic Secret and New Zealand Wakatu and Taiheke. Upon first sip, it’s bursting with those same flavours, with a lingering, lightly piney bitterness that’s refreshing and clean.

Given the significance of the day, James and the team purposefully strayed from producing a gimmicky style that would “exploit the day”, rather opting for an easy-drinking, enjoyable beer whose sales would be worthwhile. In order to achieve that, the brewery is donating fifty cents from each litre sold to Legacy.

In James’ own words: “People are still going to drink on the day, so why not give back a little.”