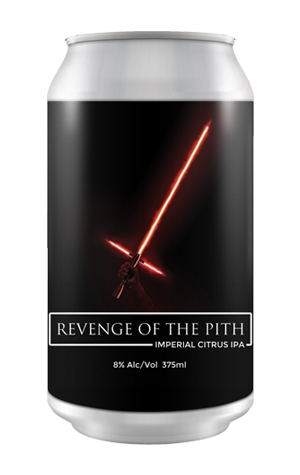 For a brewery that makes a lot of beer, The Australian Brewery doesn’t necessarily make a lot of beers. This is a brewery that’s essentially made its name knocking out a tight range that’s brought them regular success at competitions at home and abroad. As for the latest crazes? Well, it’s just not really been their thing. Sure, if the right collaborator comes along they’ll bang out a big Belgian tripel or a New England milkshake IPA but, as a matter of course, they tend to stick to what they know they do well.

And that brings us to a most unusual situation whereby a brewery that launched in 2010 – one that’s been in the thick of beer’s renaissance and was a pioneer of canned craft beer locally – hasn’t ever released what is arguably the default beer style of the modern beer movement: a really big and hoppy IPA. Until now…

Using the (un)official Star Wars day, May the 4th, as a hook – as it did in 2015 with its Feral collab, the Storm Trooper Imperial Pilsner – the brewery has teamed up with Craft Cartel to unleash Revenge of the Pith, an imperial IPA with citrus, brewed with Citra, Amarillo and Mosaic hops as well as blood orange and lime. Ahead of its launch, the AB team reckon that, despite the novelty of the occasion, this is no throwaway novelty beer, but one that stands on its own: “piney and resinous … full of citrus and ready to make its mark in a cantina from a galaxy not far away”.