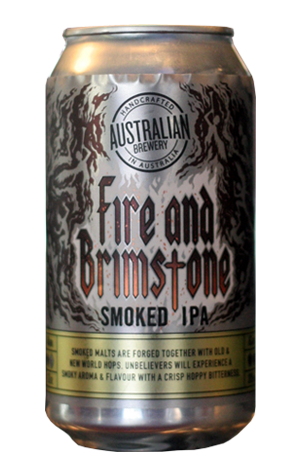 Barbecue and beer go hand in hand. But barbecue in beer? Well, yes, it turns out that concept can work too – at least, it does if the latest release from The Australian Brewery is any evidence. It’s called Fire and Brimstone, it’s a smoked IPA and that style as descriptor gives a pretty good indication of what this beer smells and tastes like.

Beers dealing in smoked malt can be notoriously divisive; some drinkers can’t get enough of the puff while others find the character offensive even in small quantities. For their part, the brewers here didn't want to hold back so used relatively high 55 percent beechwood and manuka smoked malts – enough to give them the character they were after but not so much as to forsake the overall balance. So, while the smokey and bacon like flavours and aromas are unmistakeable, they aren't allowed to take total control, leaving room for the bold characters typical of US hops to come through – imagine a campfire in a pine forest and you're on the right track.