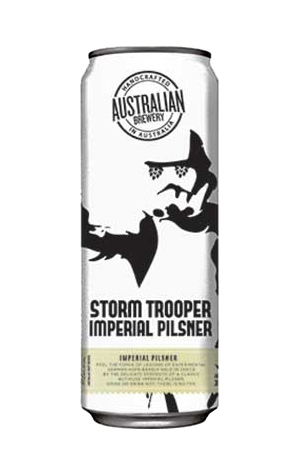 We've long felt that the Australian Brewery brews one of the country’s finest pilsners. And when The Crafty Pint was making this point while enjoying a family BBQ with Feral and Nail Brewing at the start of the year, we discovered that Feral head brewer Brendan Varis felt the same. Indeed, he felt so strongly about it that he had made plans to brew an imperial version with his Australian Brewery counterpart, Neal Cameron. It was something that had been mooted for a while but which only raised its head this week in the form of the Storm Trooper, launched on Star Wars Day, May the 4th.

At 8.1 percent ABV it certainly carries the weight you’d expect from an Imperial anything, though that’s matched with a substantial hop bitterness obtained from experimental German hops. So prominent are those hops (lest you forget, Feral was involved…) you’d be forgiven for thinking you’d picked up some sort of IPA, but there’s a crispness here that’s certainly more lager-like in nature. What’s strikingly lager-like is the clarity; this beer is exceptionally clear and has the gentle golden glow of an angel – about as far from the dark side as you could get. Perhaps it’s that which lends to the overall impression that, while it’s undoubtedly a big beer, somehow it doesn’t seem as destructive as it really is.