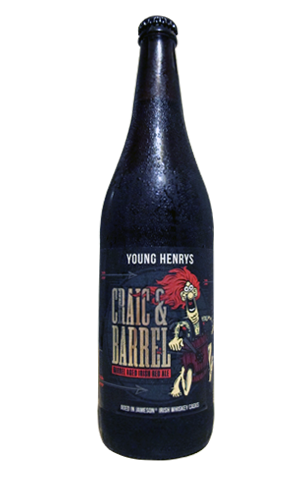 Around the middle of 2016, Young Henrys teamed up with the Irish whiskey producers at Jameson on a project called Boilermates. The concept essentially pulled together more than 60 bars across the country to extol the virtues of boilermakers – a nip of whiskey paired with a beer. And because the Jameson Caskmates whiskey is aged in stout barrels, there was inherently an extra layer of relevance. Now there’s another.

As part of the affair, a handful of Jameson whiskey barrels were shipped from Ireland to Young Henrys’ Newtown brewery. They were then filled with a strong red ale and left to see what good could come of it. And, as it turns out, there’s plenty.

At first you notice plenty of currant and dark berry character sitting on top of a rich and sweet malt base. Then, as things progress, the malt continues to run with the baton as the stronger oak character eventually catches up and helps carry it towards the finish line. The opportunity arose to sample this beer from the tank on bottling day then again a few weeks later from one of those very bottles. And the relatively short space of intervening time seems to have worked quickly to shave off a couple of rough edges, better integrate the different characters and leave us with a beer that, at a shade under eight percent ABV, is big and strong but deceptively easy to down.

Despite their prolific schedule of releases and collaborators, Young Henrys hasn't often indulged in barrel aged beers. On the evidence of this latest partnership, it’s likely to be something their fans will hope is done with a bit more frequency.