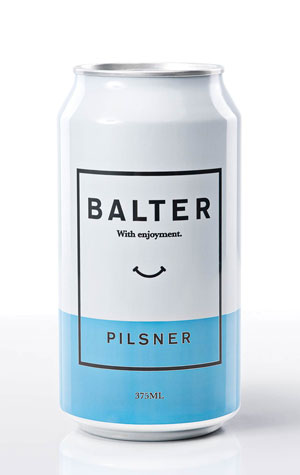 There are few experiences in the wide world of beer that can compete with the first mouthful of a good, traditional pilsner when it comes to refreshment and satisfaction. Sure, there's plenty to be said for being hit by a wave of tropical hop aromas as you raise a glass of IPA or for wallowing in the complexities of a well made Belgian ale. Yet, among the many reasons pale lagers and pilsners came to be the dominant beer choice of the planet, is that they can hit the spot marked "beer" just right.

So it's a pretty good sign when one's first reaction to a new pilsner is to rush to your pilsner loving partner and cry: "Honey, you've got to try this. You'll love it!"

That was the scene at Crafty Towers when Balter's third canned release landed. It's a beer in which there are no gimmicks at play, no dramatic New World flourishes, but, equally, no compromising either. The Pilsner is a deeply rewarding lager in which noble hops and malt sit in harmony, with the former delivering delicious soft floral and spicy characters in a beer of surprising length and depth.

In conversation with its brewer, Scotty Hargrave, he talked of such beers having a "symphonic simplicity". It might sound like a rather high falutin' way to talk about what is, essentially, a traditionally minded pale lager but, for all the talk of such beers rising to prominence in the local craft beer world, there remain precious few quality pilsners readily available from Aussie micros. At least now we can add one more to that list.

UPDATE: As of July 2019, the Pilsner has been replaced with Lager.