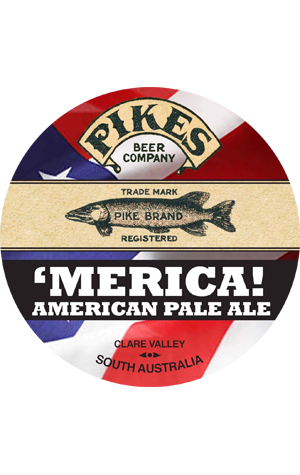 Pikes Beer Company set off for the States for their 2017 spring seasonal, a 5.5 percent ABV American pale ale aptly named ‘Merica. Loaded to the brim with US hops Cascade, Chinook, Mosaic and – one of the Pikes brewing team's personal favourites – Eureka, with Munich, wheat and a little roasted malt joining the pale malt to add texture, colour and some biscuity flavour.

The hops create a citrus bouquet – lemon, orange and grapefruit – mixed with a dash of pine and resin in a beer that pours a clear burnt orange colour with a persistent, solid white foamy head and a sprightly carbonation that's light on the palate. While hops dominate the aroma, flavour wise the distinct grapefruit flavours are accompanied by a slight bready, biscuit character. Bitterness has been wound back, leaving ‘Merica – a beer that delivers the hop forward experience you'd expect from an APA – to finish on the sweeter side.

Keg only release – just 30 of them heading across the country