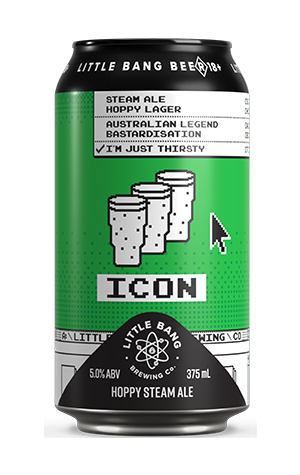 Icon was one of the first beers ever released commercially by the Little Bang duo when they launched from a garage back in 2014 and soon found a spot in our Best New SA Beers list for that year. Originally inspired by a desire to create an Australian lager that possessed a lot of flavour, it became a hybrid of sorts, an filtered and highly hopped steam ale designed as their almost entry level craft beer.

Pale and hazy, lively and fruity, lean and refreshingly bitter, it went off like a rocket from day one and is one of the beers you're most likely to find on the bar at the brewery year round. What's more, as of early 2018, it become one of the first Little Bang beers to appear in tinnies too.