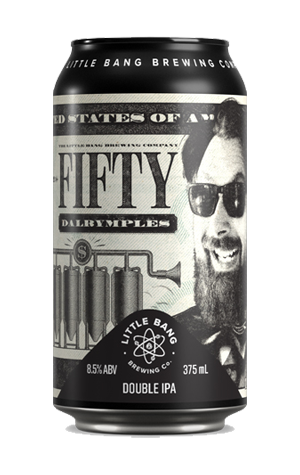 The Little Bang crew has formed quite the community in Stepney, making many friends that help out along the way. One of those is Iain Dalrymple, of Iain Takes Pictures, a close friend to Ryan and Fil who, as his business names suggests, takes sweet beertography. He also likes bitter beers and, as their long time brewing buddy, has been referred to by the name Iain "I think it could use a little more bitterness" Dalrymple.

So the beer that bears his name (and image), 50 Dalrymples – or 50 Ds, as it is referred to by locals – is an attempt to give him just that. Despite its lavish bitterness (around 85 IBUs), it remains dangerously easy to drink (at least for an double IPA), with sweet caramel malts not only carrying it to a hefty 8.5 percent ABV but also helping balance the mountain of hops that deliver those IBUs as well as the beer's floral and piney side.