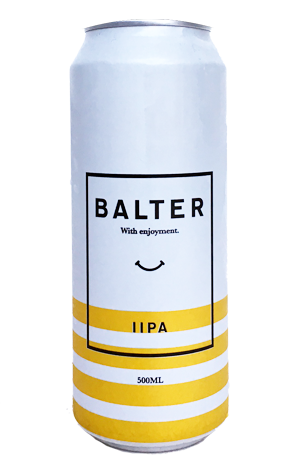 Given social media has undergone some sort of meltdown since Balter announced this beer was leaving the brewery, there's a danger there may not be a huge amount of IIPA left in fridges around the country by the time you read this, a mere 24 hours or so after said fridges welcomed the yellow striped tinnies. It's the Gold Coast brewery's second big can release, following last year's Black Metal Disco sweet stout, and sits at the top of a trio of hop dominated beers from Balter: the flagship XPA and the IPA that followed last year being the others.

And, while it's the biggest, booze wise, of the three, it's not the weightiest. Pop a blindfold on before someone hands you the IPA and you might think you've got an India red ale in your hand; here, however, the malt backbone is stripped back, leaving you with a lean beer in which the hops are handed the starring role pretty much unencumbered. If you come across an IIPA with a more distinct pineapple aroma this year, we'd like to hear from you, while you'll pick up a little pine and grapefruit as it warms, not to mention flavours reminiscent of a full bodied white wine alongside the balancing sweet malt and lingering, earthy bitterness.