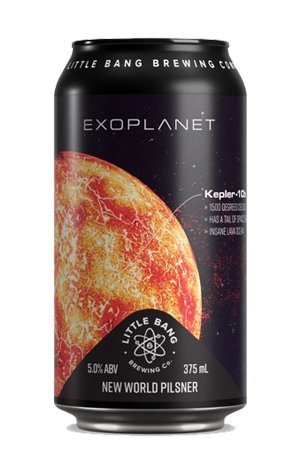 Ryan Davidson and Fil Kemp have out-nerded themselves with their latest New World pilsner, Exoplanet. Paying homage to three of their favourite newly discovered planets, 55 Cancri e, HD 189733b and Kepler 10-b, they've created a trio of different decals outlining the features of each planet; one is a mildly sweat-inducing 2000 degrees Celsius, experiences gravity 2.1 times that of Earth and is made of diamond, for example.

So how does a brewer translate such things into beer form? Through the use of a traditional pilsner base and the addition of New World hops, Mosaic, Motueka and Victoria Secret, of course.

Unlike the charred, lava ocean surface of planet Kepler 10-b, the beer pours a super clear straw/yellow colour with hop dominated aromas encompassing earthiness, spice, some biscuit sweetness and a punchy grassiness. Flavour wise, there's a balance between malt sweetness, a real grassy/earthiness and only a smidgen of juicy orange and mandarin from the hops, the latter moving the beer away from the realm of traditional pilsners and into the sort of lager likely to entice hop fiends. Or alien lifeforms that happen to be passing through Stepney.

UPDATE: The beer made a comeback, this time in a series of differently labelled cans, in March 2019