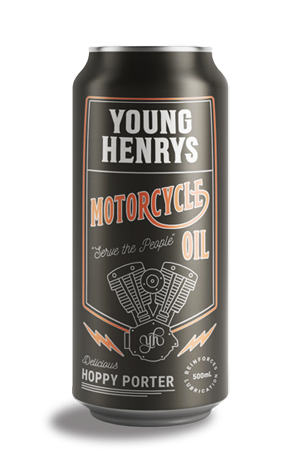 Last May, as is their wont, Young Henrys released a couple of new beers. The first was a limited edition dark ale named Motorcycle Oil while the second was the nationwide release of their Winter Hop Ale. Fast forward a year and the black bikie beer is the only one to have completed a full lap and come back, in the process taking the mantle as the brewery’s major winter release for 2018. Yet, in a way, this beer feels as though it strides both previous releases anyway.

Motorcycle Oil has been labelled a hoppy porter and, when you crack a tinnie, you’ll pretty quickly discover the emphasis is on the former style descriptor. Certainly, you get plenty of dark roast characters as you might expect from a porter overall, but what’s more striking is the citrus and pine of the hops. Indeed, because it’s got so much going on by way of punchy American hops as opposed to more traditional porter characteristics, you could make a case for the beer occupying territory normally associated with a Cascadian dark ale.

Throw into that mix a hearty dose of bitterness and a touch of peppery spice and you end up with a beer that’s a bit like a 50-year-old businessman on his first Harley: bold and loud, but not too menacing.