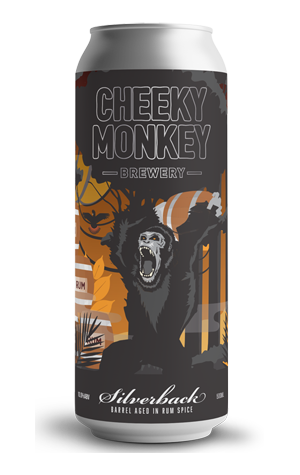 Cheeky Monkey’s winter seasonal, Silverback, returns and has brought company from the troop in the form of two 2017 variants that have spent the past year in barrels. The newest version's screaming, somewhat rabid looking gorilla is ultimately a red herring because in the glass this is far more inviting than the label suggests.

Silverback 2018’s tightly coiled, crema-coloured head holds green coffee bean, roasted malt and chocolate aromas while this year’s recipe restraint has allowed the ingredients to shine - this has the largest Maris Otter malt bill of recent releases. Balanced although sweet leaning, the Russian imperial stout delivers espresso notes, baker’s cocoa, liquorice, molten dark chocolate bitterness and more roasted malt. This may be the best Silverback expression of the past three years if it wasn’t for a couple of stave crazed primates.

The genesis of Cheeky Monkey’s barrel aged Silverback release could be traced back to sales manager & brand ambassador Brendan Day’s love of BDB – big dumb beers – a fact witnessed at Crafty Pint’s WA Beer Week event last November where he was seen sipping on a 10 percent ABV Baltic Porter as the rest of the venue enjoyed a nice selection of red ales. Judging from our tasting, these two barrel aged iterations of the 2017 Silverback should keep Brendan smiling to himself throughout the next few months.

There is no escaping the fact that the Illegal Tender spiced rum barrel aged variant is the more striking of the pair. Twelve months spent in wet spiced rum barrels has wasted no time with subtleties, as aromas of barrel vanilla, tobacco, booze and spice from 20 botanicals make it clear that this is a massive beer; a big, dumb beer. Liquid caramel comes to the foreground and, as the booze settles – its presence never really leaves – flashes of burnt orange, white pepper and brown sugar appear with the dark malts and roast. Barrel time has thinned the body somewhat, however it’s also added lasting oak tannins that dry some of the sweetness.

Available in limited release from the brewery and good WA retailers.

Punters are advised not to enquire at the Perth Zoo.