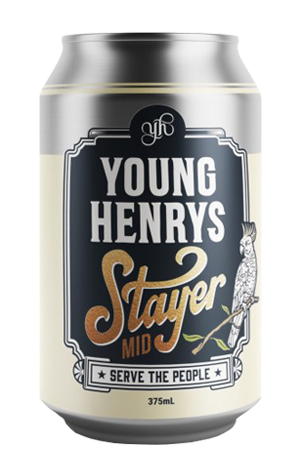 In the early months of 2018, Young Henrys dipped a toe into the mid-strength market with a limited edition beer called The Stayer. At the time it was a keg-only release whose major point of difference was the use of lupulin or hop powder, a slightly unusual move for an ingredient Aussie brewers had, in the main, used to enhance the already robust characters of highly hopped beers such as IPAs. But the effect in the lower weight grade was notable too, contributing to a more captivating fruity aroma and more acute flavour that saw the beer garner a popular following at the brewery. Indeed, it proved popular enough that it became a permanent fixture and is now available in cans alongside the rest of their range.

It’s a beer that more that holds its own when compared with a great many other beers in the 3.5 percent ABV category, the hopping regime serving up gentle tropical, stone fruit and lychee flavours which balance nicely on a light lager base that’s got something of a creamy feel due to the use of oats. But given its moderate bitterness and crisp, dry finish, it’s undeniable where it ultimately sits in the spectrum of beer styles. Inoffensive and infinitely crushable but also rather interesting, Stayer is a little beer that has all the attributes for those looking to imbibe at length without necessarily overindulging.