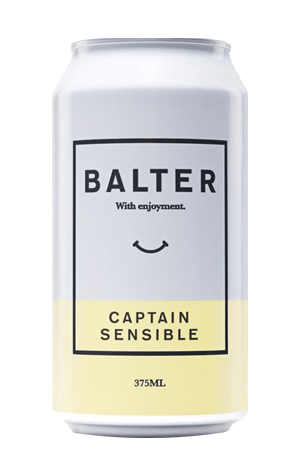 Short of banging out a 10 percent plus IIIPA, there was arguably only one place to head next for Balter when it comes to treating their army of fans with another pale and hoppy offering. And that was down. Down into the arms of Captain Sensible.

He's a mid-strength the brewing team has been playing around with for a couple of years on its pilot system, often found on tap at the Gold Coast brewery and now given the green light (and pastel yellow, "go moderately fast" stripe) to head out nationwide as part of the core canned lineup.

Its cooper hue lets you know there's some specialty malts at play to give the beer its biscuity malt backbone, one upon which you'll find hops of a mango and passionfruit ilk at play. There's a cleansing clip of bitterness in what's another addition to the growing number of flavoursome mid-strengths on offer to those in need of a sensible option.