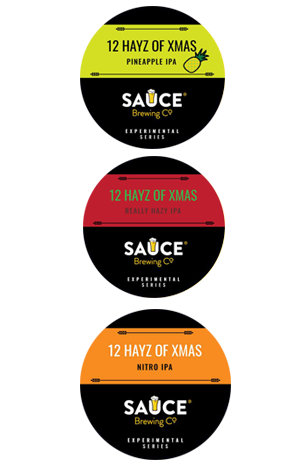 Pursuing the mantra that too much of a good thing is folly, Sauce is ushering in Christmas with a mini celebration of a form of beer for which it’s becoming increasingly known, which is to say: hazy.

Indeed, they began the week in which the celebration is launched with their Bubble & Squeak taking top spot in The Crafty Pint’s Blind Tasting of New England IPAs and, as if on cue, a couple of days later a third of their taps were pouring hazy beer. And how very, very hazy they are. It’s as if the brewers have prostrated themselves at the the feet of the gods of flocculation and been granted an audience. These beers look like some blended slurry of paint runoff and milk.

There are three new beers and, given the release date, they’re collectively known as the 12 Hayz Of Xmas. The first is the Pineapple IPA and it’s, well, full of pineapple. It’s not like drinking pineapple juice, which is a good thing, but it does leech out enough of the character to transport your mind to some tropical holiday where you can picture yourself on a lounger on a beach surrounded by a pile of fresh fruit salad that you’re not actually going to eat because you’re too busy drinking pineapple based cocktails instead.

Next is the Really Hazy IPA, a stronger, grittier, more resinous beer. It’s still abundant with tropical fruit character but there’s something more robust to it. It’s not so much that you’re taking delicate nibbles of passionfruit, mango and pineapple, rather more like someone has loaded the whole fruits into a bowling machine and is hurling them towards you at 90 miles per hour. You get the fruit, no doubt, but you also feel the bitter thump as it hits you square on.

Nitro IPA is much the same, except it’s on nitro. So instead of being knocked over first time by a fruity beamer you get the equivalent of a loosener as it rolls over your tongue then smashes against the back of your throat like a bitter bouncer. An interesting observation is that after you try the Hazy IPA and work backwards along a tasting paddle the Pineapple IPA shows even stronger character which, in the grander spectrum, is like an electrical shock to the senses.

Sauce’s 12 Hayz Of Xmas beers are small batch releases and they’re a bunch of fun, if a little challenging in parts. But if you’re a hardcore hazy beer lover, consider this your early Christmas present.

And a very select number of other crafty venues