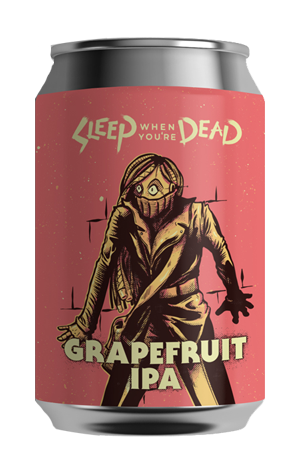 The last Sleep When You’re Dead release for 2018 is a Grapefruit IPA, the same style that captured the hearts of many with Ballast Point’s Grapefruit Sculpin and BrewDog’s Elvis Juice.

When the brewing crew at Ballistic put the first of 400 grapefruits through their electric zester… the machine broke. A few days, 400 grapefruits and countless hand cramps later, they can now boast that "hand-zested grapefruits" were used in the IPA. But, where many citrus IPAs showcase the fruit as the main hero, Ballistic’s version has the grapefruit more as the sidekick: playing its role admirably and supporting the hero, without taking all of the spotlight.

Ballistic is becoming known for its masterful balancing of flavours, and this beer is no different – it’s a fine example of a West Coast style IPA, with the Centennial and Amarillo giving aromas and flavours of grapefruit and orange blossom. The grapefruit itself then introduces a gentle zestiness to boost these flavours and mingle with the bitterness of the hops, without adding tartness or acidity.

As for the booziness you’d expect from a 7.5 per cent IPA? That’s as sneaky as the character on the label. (Like the Double IPA before it, the Grapefruit IPA also has matching merch available from the brewery for any punters keen to buy into the beautiful designs of the SWYD series.)