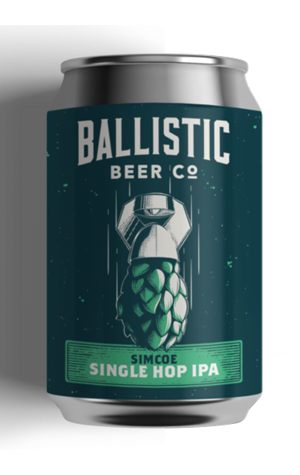 Having worked its way through the likes of Centennial, El Dorado, Enigma and the somewhat more exotic Pekko and Fortnight, Ballistic Brewing Co’s ongoing Single Hop IPA series has worked its way around to West Coast IPA workhorse Simcoe.

On the nose the Simcoe SHIPA is vaguely citrusy and (significantly less vaguely) very hoppy, with a hint of fruitiness somewhere in the vicinity of apricot. In the mouth – the best way to experience a beer, in my personal opinion – is a pleasantly light level of maltiness, a session-friendly level of sweetness, and a gentle bitterness that will linger just long enough to carry you over to the next sip.

Overall, the balance struck between the Simcoe and the Pils and Carahell malts presents a non-confrontational yet flavourful IPA that certainly beguiled me personally into believing that it was lighter than its 6.4 percent ABV, and has done little work to dissuade me from my completely erroneous and apparently impossible to dislodge belief that SHIPA stands for "shit-hot IPA".