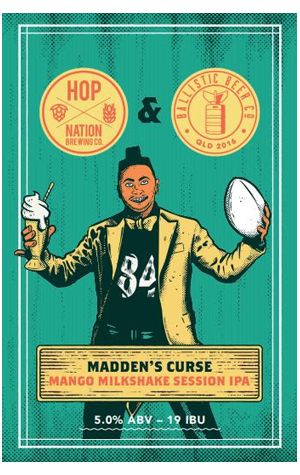 Madden NFL is an American football video game that’s stuck around for more than 30 years and, since the 90s, it’s believed to have been the source of one of sport’s great curses. Before 1998, the covers of each release always featured a photo of legendary NFL coach and commentator John Madden. After that date, different players featured and, supposedly, it’s around that time the Madden Curse began. While it could be considered a great honour to appear on a video game cover - and the players picked are at the height of their careers - it has often led to a decline in ability the following season, often due to an injury.

So, why are you reading about all of this on a beer website?

Well, the latest player on that cover is the Oakland Raiders’ Antonio Brown, whose likeness has made it onto a collaboration between the teams at Ballistic and Hop Nation. So, will the next season be the downfall of Antonio? Time will tell. For now, Madden’s Curse is a Mango Milkshake IPA, which blends dank tropical fruit flavours from the hops with ripe mango with a slight vanilla sweetness. Fans of milkshake-inspired beers will likely love it but sporting professionals beware.