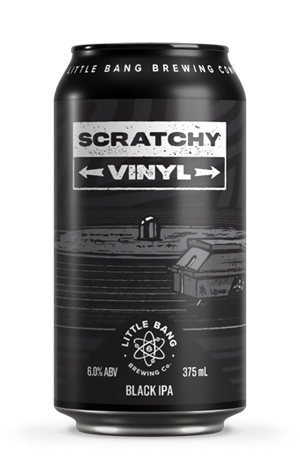 The annual Record Store Day is a big deal, with pop-up stores appearing in venues across the country and, in 2017, the Little Bang guys decided the day needed its own beer; hence Scratchy Vinyl was composed. The recipe for their 6 percent ABV Black IPA took a bit of tinkering to ensure it suited owners Ryan and Fil’s taste buds, neither of whom had previously been a big fan of the style. They wanted a Black IPA that went easier on the roast and pine characters and heavier on the fruity, floral hops. The end product, well, it’s a banger – and made our Best New SA Beers Of 2017 list.

Now ratcheted up on their new brewery and popped into cans, Scratchy Vinyl pours just shy of jet black with a light brown head. It's evident plenty of hops have been squeezed into this one, in which earthiness meets a touch of grassiness, some floral hop action and a smidgen of pine, while there's a hint of roast and even a bit of smokiness too. The roast comes through a little more prominently to taste but there remains a smattering of grassy, floral hops, with dried fruits and coffee rolling in at the finish.

Were it vinyl not beer, you might go with: "Smooth notes and melodies intertwine before a hardcore rock 'n' roll encore."