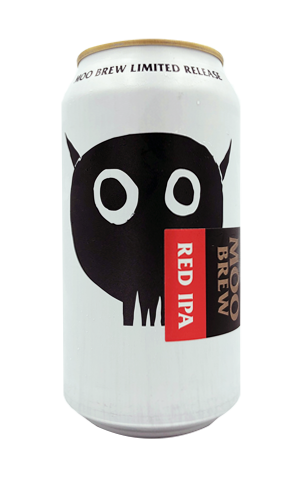 Moo Brew and Dark Mofo both hail from the same place: the unique, mind-bending arts, booze, culture and whatever else takes their fancy empire sparked by David Walsh. So it makes sense the former would be involved in the latter – and would brew a beer for the event too.

This Red IPA was launched at Dark Mofo 2019's opening weekend and has been heading across the mainland since in the brewery's new look limited release cans. They follow the popular "pop a sticker on a standard design" approach but, as is their wont, the stickers are gilded and embossed and the top of the tinnies are gold too.

As for what's inside, the liquid is more auburn than red and loads up the specialty malts and hops in equal (and sizeable) measure, encouraging them to embrace as one. The former are mainly of the toffee variety, the latter parts earthy, piney and paw paw-y and contributing a pretty potent, drying bitterness that pull the beer well away from the sweeter end of the RIPA scale. Taken as a whole, it's what we've come to expect from Moo over the years: a fine example of the style.

The above are tap stockists; cans going further afield.