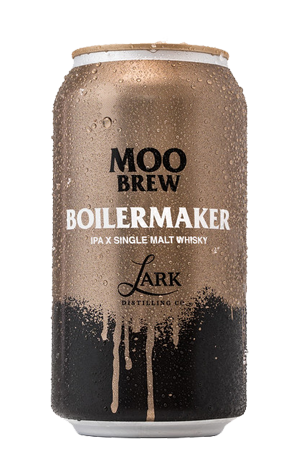 Boilermakers have been increasingly commonplace around the hospo scene in recent years, and the barrel-ageing of beers takes place at many a brewery too. We've even seen whisky and beer blended as one in the past: Boatrocker's Dramjet (still and sparkling), for example; also Loch Brewery & Distillery's Boilermaker releases. The last of these remains a true rarity, however, and I'm pretty certain I've not come across a local blend of IPA and whisky – at least not one created purposefully by the producers rather than by someone playing around at a bar or in their home.

As they emerge from Tasmania's lockdown, two of the state's higher profile operators have combined their wares as one, blending Moo Brew's core range IPA with a single malt whisky from Lark's bond store. Not in a barrel; just two liquids they figured would work well together blended together, canned and released.

Having tried the IPA Boilermaker alongside the straight beer, it seems the original's fruitiness is subsumed by the whisky, or at least turned into a different, spicier, drier fruitiness – like a dried fruit bouquet rather than the more vibrant, hop-derived aromas of the IPA. The oak lends the malt character of the original a creamier edge, even adding hints of chocolate amid the rich caramel and spice. The peaty iodine character from the whisky takes its time to appear but, when it does, it's like the late arrival at a party that bursts in, makes an impression on everyone in the room, and is last to leave.

It makes for a fascinating experiment, one leaving a flicker of spirituous heat at the very end, and which brings to mind the sort of whisky-infused fudgey treat you might pick up from a tartan-themed cellar door in the Scottish Highlands. It's also a reminder of just how good Moo's straight IPA is, for that matter.