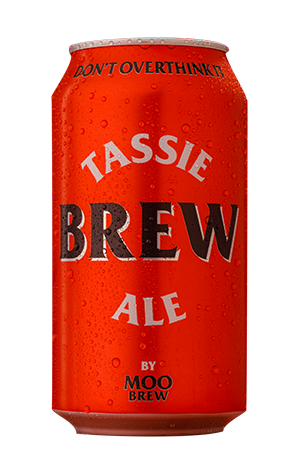 The BREW by Moo Brew range is a sibling stable to the Tasmanian brewery's main offering, with the simple, stripped back cans containing beers that are quite straightforward and approachable too. The series launched early in 2021 with the blue Tassie Lager and, early in 2022, it has been joined by the red-hued Tassie Ale, which means in terms of can colours at least the independent operation has the state’s two major breweries in its sights.

In terms of drinking occasions, Moo have those moments often lubricated by macro lagers in their sights too, with the first two BREW beers designed to be bought by the case as fridge-fillers. It means you'll find Tassie Ale to be an easy-drinking beer with a restrained hit of tropical fruit from the hops, a slight bready note from the malt, and a crisp finish with almost no accompanying bitterness.