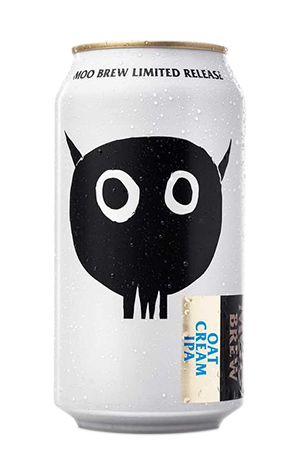 We’ve said it before and we’ll say it again: Moo Brew are certainly making up for lost time when it comes to IPAs. They've gone from being a brewery saying they wouldn't brew one, to adding one to their core range and now, a few months on from the appearance of their Winter IPA (a black IPA or Cascadian dark ale by any other measure), they’ve followed it with the more springtime-appropriate Oat Cream IPA.

In true Moo fashion, it's been launched with a campaign featuring some familiar faces to those who know the brewery well, reminding the world that, even though the beer is full of oats and fruity, it’s not breakfast.

It’s not just lots of oats in the beer either, but loads of hops in the form of Enigma, Citra and Mosaic which provide pawpaw and orange along with a slight berry note. Couple that with the beer's sweet edge, lush body and low bitterness and you have the kind of dialled-in, hazy and pale beer that you'd expect from the pioneering Tasmanian brewery. Even if they lied and said they wouldn't brew an IPA.