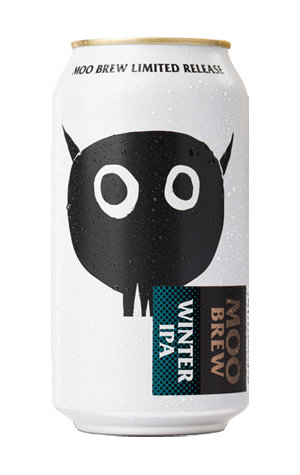 For a brewery that was never going to release an IPA, Moo Brew have certainly been making up for lost time in the past year or two. They've got an (excellent) core range IPA these days and have released others in can since that appeared, including this limited release for winter 2021.

If you pick one up on the mere strength of it being Moo Brew (with the confidence that engenders) and an IPA, you might be in for a wee shock early on. There's nothing on the label to let you know the liquid inside looks rather more like a stout than your standard IPA. Indeed, in character, it comes across like a biscuit-dipped-in-an-Italian-coffee-IPA hybrid with the hop-derived bitterness seemingly mixing with the roastier edges of the specialty malts.

The Sabro, Simcoe and Galaxy hops also contribute some piney / herbal / dark fruit elements low in the mix (at least that's what I pick up more than the "hefty mess of tropical fruits" from the brewers' online tasting notes) in what, with hindsight, is how you probably should have pictured a beer called Winter IPA after all...