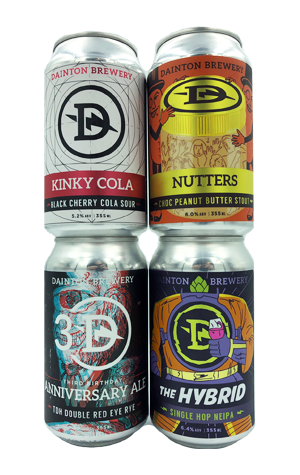 What to do when a brewery is on a mission to release a new can every week? Take them on in fours seems as reasonable a response as any in this manic new world we currently inhabit. And, as we kick off this approach to Dainton's beers, it's fair to say there's plenty to differentiate between the quartet.

Kinki Cola is a spin on Cherry Coke, featuring black cherries and sharing common ground some some of the dark sours that pop up occasionally (of the kettle or quick, rather than barrel-aged and blended sour variety). Pouring deeply dark brown, the cherry tartness sits within malt flavours reminiscent of an artisan cola more than a mainstream brand: a little herbal and anise like.

Nutters is the latest of a flurry of peanut butter-inspired choc beers to come our way this winter. Initially, it doesn't seem to be as crazily peanut buttery as some, but give it time... and that nuttiness is still pretty darn distinctive, particularly to taste in what's otherwise a dark brown, chocolatey stout that's aiming to land both feet in the heart of a bumper size Snickers.

For all the beers that have come and gone in Dainton's relatively short existence, the original beer, Red Eye Rye, has stood the test of time. Here, it's souped up as 3D, the brewery's third anniversary beer. It retains the original's lovely amber colour, along with the glistening appearance that comes with nudging into 8 percent ABV territory. Rich, sweet toffee/caramel/syrup malts are topped by some piney aromas and a touch of citrus to taste, creating the impression of a lively young barleywine.

The last of this four is The Hybrid is a NEIPA that makes a feature of a single hop variety, a German grown version of Amarillo, which hails from the US originally. From the opaque, pale orange haze rise citrus rind, pine and pineapple aromas – with a denseness that nudges into dank territory, while some a grapefruit pith like resinous grip looks to cut through the otherwise full and creamy mouthfeel and the beer's slow-building warmth.