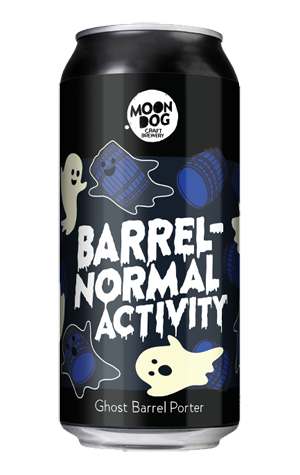 Back in early 2019, we spoke to Jason Perrault, a hop breeder from the American Northwest. Towards the end of the interview, he spoke of a new hop variety they were developing that could give barrel-ageing qualities to a beer. The hop doesn't yet have a "proper" name but has started appearing very occasionally in limited release beers here, including an IPA that's just left Ballistic's brewery in Brisbane.

Moon Dog got their hands on some of Yakima Chief Hops' HBC 472 too and decided to see how what it would do when used within a porter. Taking the porter side of things first, it's at the lighter end of the style spectrum, more brown than roasty, with choc nut malts to the fore. As for the impact of the hops, vanilla is the most obvious distinction with hints of the characters you'd associate with a beer that's spent time in bourbon barrels. I reckon there's some lime in there too (reminded me a little of Sailors Grave's Law Of The Tongue in that respect) in what's another reminder of just how many new lands there are yet to be discovered in the Wide World Of Beers.