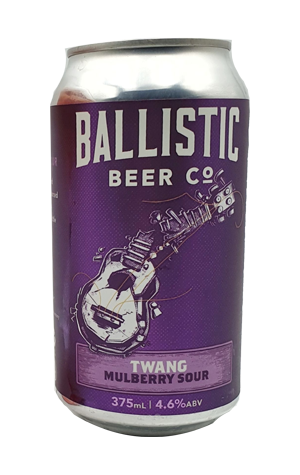 Ballistic’s Twang series started with one limited release - Twang Tropical Sour - but since that beer’s popularity sparked the series, it seems there’s always some version of the sour smasher floating around. Whether it’s dry-hopped with a combination of hop varieties, or includes additions like hibiscus and feijoa, Twang has become more or less a staple in the brewery’s seasonal rotation.

The latest kettle sour comes with the addition of mulberries. If your childhood was anything like mine, you were constantly either waiting for mulberries to be in season, or gorging yourself shamelessly on them and wondering if you could somehow hide the stains from your parents. Those pesky little berries have certainly stained this beer - it’s not the colour of the fruit itself (dark purple) but the colour that’s left on your fingers and lips and clothing, a deep bloody red. You’d almost be forgiven for thinking this ruby drink was a red ale if it weren’t for the tinge of pink in the billowy head.

As far as sour smashers go, it’s more at the “smasher” end, with less puckering tartness than some of the previous beers in the series. While it leads with a little berry and lactic acid sharpness, it still lets the malt and yeast play their part in the flavour. However, the berry never stops grabbing your attention, but keeps giving nudges in different directions like a puppy with a ball trying to get you to play.