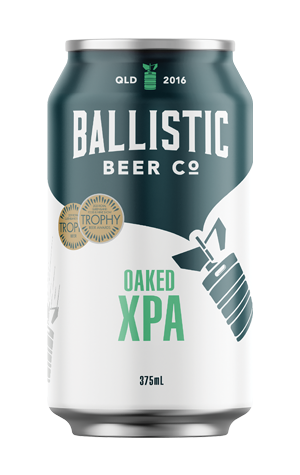 The past few years have seen the introduction and subsequent rapid rise of XPAs within the Australian beer market. But while "XPA" is only a young style, it’s already undergone the treatment that Australians notoriously give to everything: “Let’s mess around with it and see what happens.”

So, when Ballistic decided to brew an XPA, they chose to give it a clear hop profile of Citra (with some Magnum for bittering) and to ferment it on toasted American oak chips. In doing so, they’ve created an interesting variation on the style that won punters over immediately - what started as a limited release quickly became a fan favourite and a trophy-winning beer, and has since become part of Ballistic’s core range.

The nose is grapefruit with just a hint of sourdough bread, with the hops bringing in more grapefruit and even a light nectarine tang, as well as a slow rise to a citrus peel bitterness. The oak is only a background flavour, with a subtle vanilla and woodiness barely perceptible in the background. But its subtlety is its specialty, as it brings an immaculately integrated smoothness that nothing else could. The oak also provides a velvety texture that gives you the same feeling as drinking a vanilla milkshake beneath a soft, crumpled blanket.

For more on the new core range head here