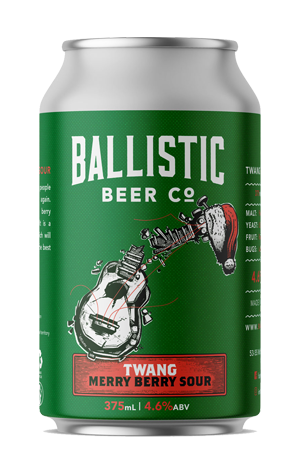 Twang the night before Christmas, no creature did rouse
When Father Ballistic arrived at the house.
His job, as you know, is to bring Christmas cheer,
So he stood on the roof with a sack full of beer.

No fire was burning for evening was warm,
All humid and stuffy, all ready to storm.
So right down the chimney the old man did scurry,
Then straight to the fridge he went in a hurry.

He opened the door, reached into his sack
Then pulled out a shiny and festive four-pack.
He placed this fine gift on the very top shelf,
Then stole back two cans - for himself, and his elf.

He cracked one post haste, did not let long pass,
And poured it - as one should - into a nice glass.
Held it to the light, as some beer snobs do,
To take in its cloudy tinned peach syrup hue.

Then sipping, he noticed, that observant fella,
The balance of sweetness and sour was quite stellar.
The tartness from lactic; the sweetness, he knew,
Came from raspberries and strawberries and berries of blue.

Light rockmelon played on his nose for a while,
He sipped it again and again with a smile.
While notes from the trio of berries were subtle
He wasn’t complaining; he had no rebuttal.

Refreshed and revived he drained the last drop,
And made his way back to the hearth with a hop.
He entered the chimney, looked up with a huff;
Just one Merry Berry was hardly enough.

Quite slowly he climbed (for he was not skinny)
And paused halfway up to drink poor elf’s sole tinnie.
So now two beers down, he belched with great glee,
And thought about going back down for drink three.

But he climbed to the top, for his job was quite clear:
To jump in the sleigh and deliver more beer.
His Designated Reindeer took off in fleet flight.
“Merry Berry to all, and to all a good night!”