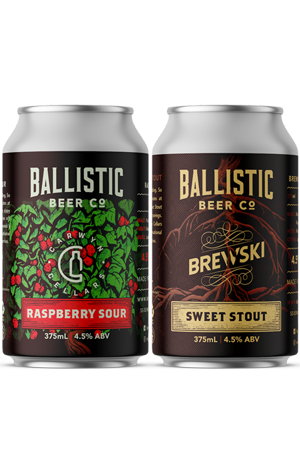 Dear people who are better at maths, logic, or philosophy than I am: help me out here. Ballistic made two new beers. They’re designed to combine into one beer. So technically they’ve made three beers. But since they encourage experimenting with different blends, have they actually made infinite beers? DID BALLISTIC JUST INVENT INFINITE BEERS??

If your brain is hurting as much as mine is, rest assured - I’ll tell you the best combination at the end of this, so you can ignore Ballistic’s fast and loose, reality-defying recommendation and just stubbornly sit with one beer like I did.

Ballistic Beer invited the teams from Carwyn Cellars in Melbourne and Brewski Bar in Brisbane to join them for a collaboration brew day, and between them they brewed two beers: the Carwyn Raspberry Sour and the Brewski Sweet Stout. Each was meant to have a relatively simple flavour profile, because they were made to be blended together so that each person could pick and choose their own level of complexity. To this end, the two beers are sold in mixed four-packs, and even the can designs work together when you stack them on top of each other.

Like the good scientist I am (stop laughing), I decided to taste them separately before I blended them together.

The Carwyn Raspberry Sour, surprisingly, doesn’t pour pink, but more an apricot colour, like a skin contact natural wine - perhaps with the slightest blush of rosiness in the right lighting. The aroma is all about the raspberry, with a slightly floral scent joining it. But in the mouth that eases into a cool bath of kettle-soured and citric tartness, though the fizziness lets the raspberry continue to ride along in the upper palate.

Then comes the Brewski Sweet Stout. Don’t expect the sticky sweetness of some milk stouts - the lactose here plays more of a balancing role than a dominant one. It brings just enough sweetness to keep harsh bitterness away, letting the roastiness, the black coffee and the dark chocolate characters do their thing.

Alright. Ready to hear my mixing secret? Don’t let the raspberry sour take over. It wants to.

Half and half: Your raspberry sour now looks like a dark beer, with 90 percent of the opacity of the sweet stout on its own. Granted, you can start to pick out the flavour of the stout, but you’ve got to work at it. Who wants to work? I’m not here to work.

More sweet stout than raspberry sour: Now we’re talking. With a ratio somewhere between 2:1 and 3:1, this is a complex blend of flavours where each beer brings its best. The dark malts and the fruitiness really bounce off each other. This is a stout with a tang of raspberry, and the acidity brings a real crispness that makes this an all-weather drink.

This is the correct and best way to drink these beers. Fight me.