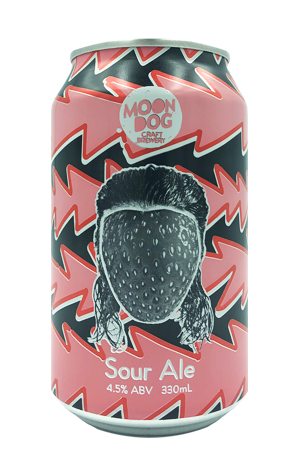 We've given Moon Dog's Magnificent Mullets series credit in the past for being somewhat ahead of the game in terms of the Aussie beer scene, even popping them into our Beers of the 2010s feature at the end of 2019, back when we thought that year was shithouse. Given our current predicament, it may well be they're prescient in more ways than one. After all, who among us hasn't considered the ways in which we can take advantage of enforced isolation from the rest of society?

While mullets were briefly raised at Crafty Towers, they were as quickly dismissed (other than for Crafty Pot Jr who seems keen for a few go faster stripes). We're going to see how a balding, greying, pale man of Scottish heritage looks with a B.A. Baracus first and go from there, but I'd wager there's a few people eager to set their inner mullet free, a desire they'd kept under wraps while still going about their normal work life back in the days BC.

Which brings us to Jean-Strawb Van Damme, the latest mulleted sour ale from Moon Dog. JCVD was one for whom the mullet came both sweat-drenched and coiffured; in the case of the pink can bearing said mullet, it's less sweat-drenched and coiffured than gently massaged. Lightly hazy with a broad acidity and strawberries of the soft, almost creamy kind, it's an easy-going addition to a series surely building up to a Hoddle & Waddle double-header.