Beer Moon Dog In The Crumble, The Might Crumble: Berry Edition 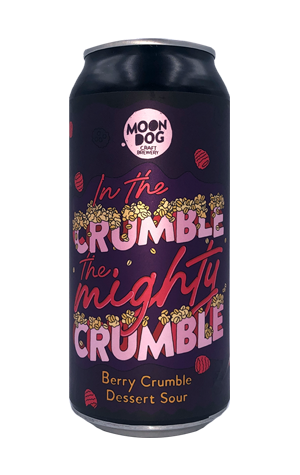 It's a sign of the beer times that, even when including water among the traditional ingredients, the list of ingredients marked as "Other" on a can manages to outgun the water, hops, malt and yeast by eight to seven. Making up the eight here are lactose, vanilla, cinnamon, apple and raspberry purée, blackberry juice and lactobacillus; no one ever said Moon Dog was in Munich.

Their impact, at least visually, is as far from the lagers of Munich as you could imagine too; the murky amber liquid the flows into your glass is closer to slurry than fruit juice. But, then again, just what would berry crumble look like after it's been through a blender...?

With In The Crumble, it's worth poking under the skin, however, as those purées and the juice pop while the lactose and vanilla provide a little supporting creaminess. What's more, I'm pretty sure it's not a trick of the mind that something resembling cinnamony, biscuity crumble lurks underneath it all, especially once the tart, cleansing fruits have made their exit stage rear. It's a classic case of doing what it says on the tin and as good an example of a berry crumble dessert sour as I've tasted.