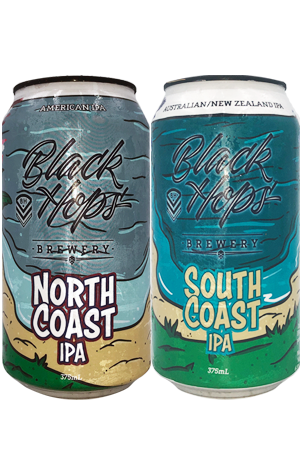 Hops are grown elsewhere in the world, most notably across stretches of Northern Europe - home to the varieties from which many of today's superstars have been birthed over the decades. Yet, in the contemporary craft beer world, it tends to be those from the New World – the US, NZ and Australia – that get brewers and beer lovers alike chomping at the bit. So Black Hops decided to give drinkers the chance to see how those from one side of the equator fared against the other.

That said, this US vs Australasia face-off isn't one in which a singular malt base is used with the hops providing the only variation. In the case of North Coast, it's akin to the West Coast IPAs of a few years back: copper-hued with rich caramel malts playing a distinctive role alongside the sweet citrus, candy, berries and pineapple flavours and aromas. Clear as anything and with a piney, resinous bitterness that cuts through the somewhat viscous body, it's a tasty throwback to the last decade.

South Coast is paler and a little danker in character. The coming together of Aussie and Kiwi hops (Nelson Sauvin, Vic Secret, Taiheke and Waimea in this case) is not so much the popping passionfruit of many an Aussie IPA as it is a showcase of white wine, young mango and melon rind. There's a touch of the tropical but it's less ripe, sweet fruit than quenching and grippy.

In both cases, it's not hard to see why New World hop growers have had their Old World forebears looking to create bolder new varieties.

Style
US & Australasian IPAs
ABV
Both 6.8%