Beer Moon Dog The Pav Is Ours 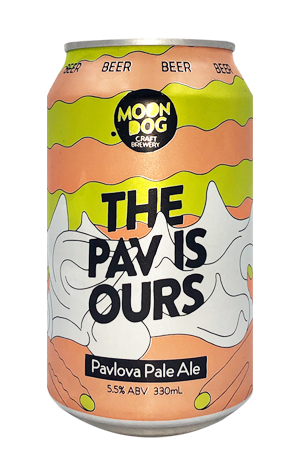 They started the week with a beer recreating berry crumble in a can and are ending it with a pavlova pale ale. What has the world come to, eh?

Let's start with the name. Not so much The Pav Is Our, but the pale ale bit. Now, it is on the paler side, possibly with a hint of blush from the strawberries (added with passionfruit, kiwifruit and vanilla). But if you know your pale ales as hop forward and bitter, this isn't that. Rather than a blast of fruity hops hitting you first, it's vanilla forward; close your eyes and you'd think you had a caster sugar-sprinkled, fruit cream compôte under your schnozzle.

There's so much crammed in there, I won’t even try to pick apart the pieces, other than to say there's a touch of fruity tartness there to lighten the otherwise vanilla-laden load. It's quite lolly like in its sweetness, albeit with some acid tartness there to offer balance. A long way from your standard pale ale indeed.

This is a Dan's / BSW exclusive