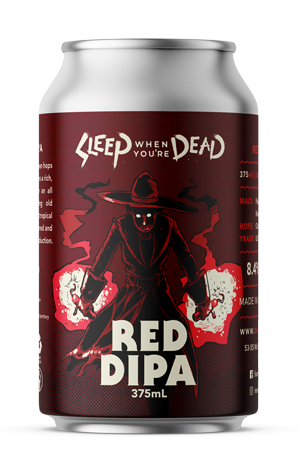 When Ballistic brought a double IPA into the Sleep When You’re Dead series, it was a punchy thing, advertised as such by the character on the label. But this Red DIPA is a more subtle creature, making the TNT-wielding cowboy on the label a little deceptive. Don’t get me wrong - there’s a heap of complex flavour here (thanks to five different malts and four hop varieties). But the long fuse may let this explosive beer sneak past your defences.

The SWYD Red DIPA sparkles like a dark ruby in the light, but almost transitions to brown in the shadows. Right from the aroma, it brings the cutting bitterness of grapefruit zest and the sweetness of toffee. Sip it and feel it run over the tongue like simple syrup - slick without being heavy. Then feel it unleash its full spectrum of flavour - subtle floral notes and potent grapefruit marmalade; sticky mango and ripe pawpaw; caramel and toffee and burnt sugar. Towards the end there’s an ethereal roasty bitterness, like smoke hanging in the air after a blast. But despite all this flavour, you’d never guess this beer was 8.4 percent; it hides its alcohol well.

This is what I used to imagine red cellophane tastes like. (Note: I now know better. Red cellophane does not taste like this.)