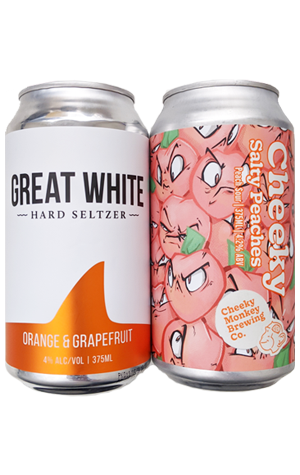 It’s midway through 2020 – sorry if this is shocking news – and our suggestion brewers would become orchardists in our annual Best New WA Beers article is looking an ever safer bet. Fruit in beer is here to stay, as this pair from Cheeky Monkey can attest.

Firstly, Salty Peaches’ playfully disgruntled peach emoji can art is sure to bring a smile even if sours aren’t your thing. But, if they are, then expect a mix of salty, peach fuzz and pulp with fruit tartness providing contrast, while also drawing down on the tongue in almost tannic fashion, upon a lightly lactose-infused palate.

And, if sours aren’t your thing, then, just maybe, hard seltzer is. Great White’s second iteration features orange and grapefruit, and the aroma is as genuinely amazing as its clarity. Bright ruby grapefruit leads with supporting sweet orange through low but spritzy carbonation – this is appropriate for style – before dryness increases through finish, becoming almost bitter in the faintest of fashions.

Now, if a low ABV, 100 calorie, gluten free beverage doesn’t sound like your thing, then Cheeky Monkey will likely have a new hazy iteration of their surf break series available, or a bourbon barrel-aged Silverback Imperial Stout, given it's still mid-year. And, if you don’t like any of these, then maybe we aren't the website for you.

Note: there may be other hard seltzers released by Cheeky Monkey, but we won't be writing about them. We're happy to let readers know which breweries are playing in this space, but we're a beer website and need to focus our attention on the diverse array of beers being released.