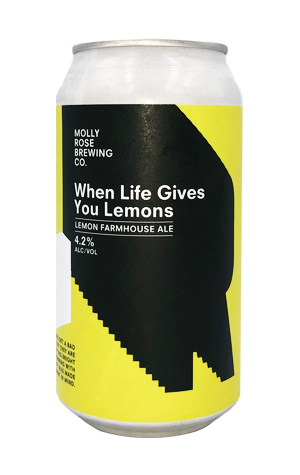 When Life Gives You Lemons started out as a one-off can release from Collingwood-based Molly Rose late in 2019. It was a hoppy farmhouse ale that also featured a spot of "dry-lemoning" with the aim of recreating a lemon slice like experience. Six months or so later, a new version of the beer has been released as one half of the brewery's canned core range.

The biggest change is the reduction in alcohol content to a sessionable 4.2 percent ABV, although you're as likely to notice the canary yellow cans first given the manner in which they stand out from Molly Rose's previously black and white designs. The beer itself remains sprightly, with bright lemon citrus to the fore in a manner not too dissimilar to Solo. And, while the farmhouse characteristics are kept relatively restrained – tastes might be changing but you're still unlikely to shift significant volume of a funky saison – the yeast adds a little spicy perfume and depth to the experience for those drinkers after more than a dash of hops in their session beers, not to mention aiding the dryness of the finish.