Beer Moon Dog In The Crumble, The Might Crumble: Apple Edition 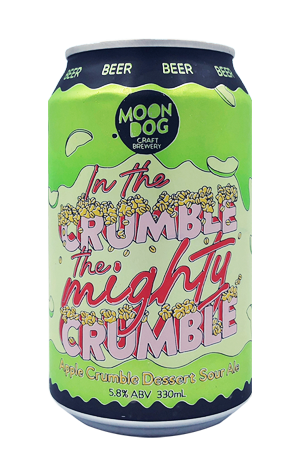 The berry edition of Moon Dog's occasional In The Crumble series of dessert-inspired sours took me by surprise earlier in the year, tastily delivering on its promise despite making its way from can to glass like slurry from a sewage pipe into a canal. It was the second such beer, with the series debuting with 2019's "Apple Crumble Dessert Sour Ale", which now returns for a wider release in 330ml cans.

It pours with a similarly murky quality to its berry counterpart albeit with more of a crushed-biscuit-cake-base tan colour. The aroma is that of a more straightforward lacto sour, one with a hint of apple juice and a spicy note too, presumably from the cinnamon. It reminds me of the sort of spiced snack one might pick up while perusing the stalls at a European winter night market rather than a slice of apple crumble; in fact, more than that, it's a tangy smoothie into which you've swirled the crushed muesli sprinkles.