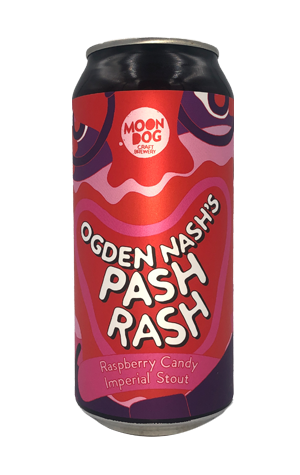 Moon Dog have done many things the vast majority of brewers wouldn't – or would consider too daft – over the years. Among them was creating Ogden Nash's Pash Rash, a flavoured imperial stout that first time around required the then far smaller team to unwrap 5,800 of the lollies formerly known as Redskins so they could be added to a big stout.

Things have changed since. For one, the name of the confectionary is to change. Secondly, there's an entire subset of the industry on a frantic hunt for something new they hope will catch fire in Facebook beer groups and on Instagram, a hunt which means an imperial stout laden with kids' treats is pretty much par for the course these days. I mean, couldn't Moon Dog have at least dosed this with nitro?

In keeping pretty much to the original plan, they're giving drinkers that upfront massive lolly-berry sweetness with a mug of sugar-boosted, choc fudge mocha lurking behind. While the contrast between lollies on the nose and chocolaty stout on the palate was quite bananas in the OG beer (at least on release; they kind of seeped into each other over time), this time around it feels more like a case of meeting in the middle. A "candy imperial stout" is what it says on the tin and that's what you get, as daft as that once might have sounded, as of its time as it is now.

Around Aus from Aug 31

Or via Moon Dog online