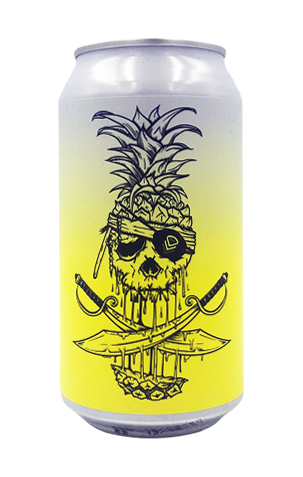 Let's be honest, if there's one thing the past few years have taught us when it comes to beer it's that sometimes, no matter how bizarre a concept sounds, it can actually turn out to be at least OK, occasionally delicious. That doesn't mean the words "fruit and rum-soaked" and "hazy IIPA" set next to each other doesn't still raise an eyebrow. Yet the beer those phrases adorn – Black Hops' Caribbean Haze, originally a collab with Mount Gay Rum for GABS 2019 – has become one that's outgrown its original concept and has returned again complete with a new Pineapple Pirate look.

The collab sees the brewers taking an imperial IPA (weighing a light-for-style 7.8 percent ABV) and spicing it with citrus, pineapple, mango and coconut-infused Mount Gay Black Barrel Rum. And the reason it works to the extent it's become one of their most asked-for beers is mainly down to the fact it treats its constituent parts with kid gloves.

There’s a hint of rummy booze on the nose but it’s not overbearing or hot. There’s a little fruit juice-like tartness on the palate but there’s also depth to the malt flavour that provides some balance. The result is a beer that sits in decidedly tropical and reasonably sweet territory, albeit with a tangy, freshly squeezed grapefruit juice-esque bitterness playing the role of anchor.