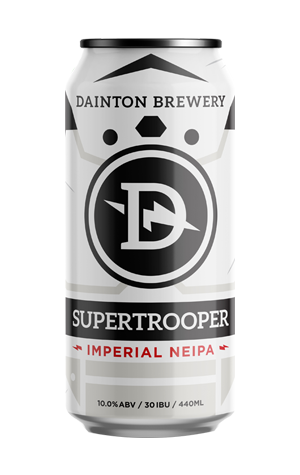 They’ve made dozens of NEIPAs and other hazy variants over the years at Dainton and with the elevated-to-core-range offering Jungle Juice really hit the sweet spot. While many of the variants have played with different hops and fruit, arguably the one that's generated the most noise at the pointier end of the beer world is Supertrooper, which is now part of their Hardcore Range of pretty much year round and rather large beers.

Pulling off a NEIPA above a certain size is tricky and here you have to be prepared for a sticky sweetness at the heart of the beer - partly stewed fruits of the tropical and peach / nectarine ilk, partly malt syrup, partly meringue. It has a dense, cloudy appearance – like brekkie juice with a head – while there's a side to the hop characters that reminds one of walking through hop fields around harvest scrunching cones in your hands. That sits alongside some sweet, slowly warming alcohol and comes out fruitier via the belch test.

You’ll get a cleaner expression of hops with Jungle Juice, but we know plenty of you chase oomph more than anything, and this is one Supertrooper ready to storm your senses.