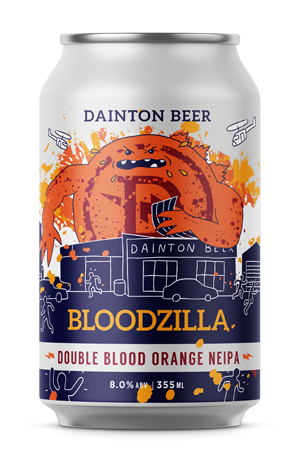 Dainton have enjoyed success with blood oranges in the past, with their Blood Orange New England Rye IPA (now just Blood Orange NEIPA) winning fans and a trophy along the way. And here they take that template and, in a fashion typical of the brewery, pump it full of steroids.

In doing so, they've ended up with a beer in which the fruit character takes on the intensity of a cocktail adorned with twisted rind, an intensity that's likely heightened by the extra booze and contributes a welcome tartness bordering on the acidic. It comes in handy to counter the sweetness that lurks within thanks to the 8 percent alcohol content, which rises through the foggy orange haze.

As an aside, the name brings to mind one of Crafty Pot Jr's favourite books, Burpzilla. It's not one of the great kids' books, with several of the verses missing the beat, but it does end with a large monster sat alone, belching, on an island after eating those that dared mock him. Hoppy beers are often well assessed by the belch test, which in this case confirms you have a highly boozy fruit juice in front (or inside) of you.