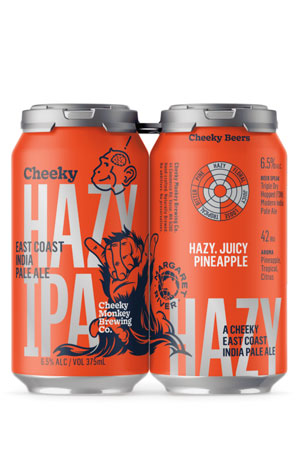 The weekly sum of new 2020 releases can challenge the purchase decisions of even the most "checked in" beer fan, so the arrival of a new core range beer seems almost gleefully avant-garde or, at best, blindly optimistic, even if it’s hazy. And that would be the case here, if there wasn’t a longer story at play.

Supertubes East Coast IPA, originally a collaboration with Cellarbrations Carlisle and The Dutch Trading Co, arrived just shy of Valentine’s Day this year, after considerable research and at time when the Cheeky Monkey team may have secretly considered they had missed the haze train. However, by playing the long game, turbid pours continued to gather momentum, and the brewery issued variations on the theme under the Surf Break Series, quietly listening, reviewing and adjusting each new batch.

Only now the curtain falls to reveal the core range Cheeky hazy, an East Coast IPA with repeatability, consistency and scale in mind – perhaps unsexy terms in the entropic world of haze, but most punters should be thankful for the effort.

So, where did 18 months of research and development land? A lot closer to where they started with Supertubes than expected. There’s big passionfruit, pineapple and orange, with faint pine, grapefruit and Strata berry influence, while lightly lilting carbonation makes this feel like a fruit-laden summer punch.

Available from both Cheeky Monkey breweries