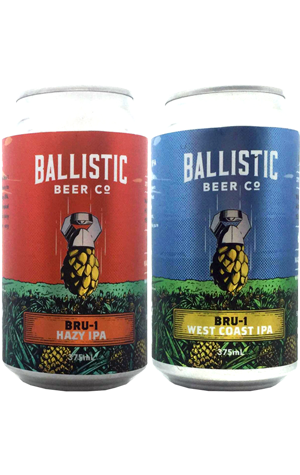 Ballistic have been making single hop IPAs since right back when they were still in their brewers’ nappies (please forgive that awful, awful mental image) – this video gives a bit of background into their single hop series.

Now, three years in, when they decided to make a Bru-1 entrant in the series, they saw the potential of not only brewing a SHIPA on their standard West Coast base, but also brewing a hazy variant to see how the hop plays with different sub-styles of IPA. An experimental adventure for everyone!

With Bru-1 hops described as being all about pineapple, and the labels on these beers showing a hop bomb dropping into a pineapple fields, you’d be forgiven for having narrow expectations. But these aren’t one-dimensional beers. The West Coast IPA brings in pineapple on a hot, sticky day – it’s got that overripe sweetness thanks to the solid malt base carrying it, and a whiff of mango going soft in the fruit bowl. But this is also the day the lawn needs mowing, so while your palate is coated with the fruit, there’s also cut grass in the background. This beer’s dry in the finish, but there’s a bitterness you can’t bite off.

When you get to the Hazy IPA – which is probably better consumed first, actually – you’ll get something totally different. Instead of bright liquid gold, this baby looks like cloudy pear juice. And while the WCIPA had Bru-1 in the whirlpool and dry-hop, the hazy is all about the double dry-hop. Pineapple and other tropicals are rampant on the nose, along with a clear line of fruity esters courtesy of the juicy London Ale III yeast. When it comes to the mouthfeel, trade in the summer humidity for the wispy clouds of spring; rather than thick and sticky malts, the hazy uses rolled oats and wheat to sit soft and fluffy on the tongue. So smooth, so light, and oh so easy to drink. A lesson in delicacy.