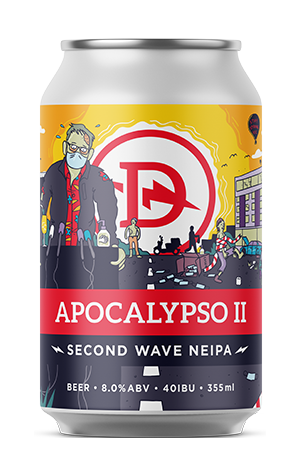 There’s a classic trope in zombie movies and TV shows where the main character wakes up a few weeks into an apocalypse to find their world simultaneously looking quite the same and entirely different. The high school is still there, the shopping centres remain standing, and it’s still their hometown but there’s nobody wandering about, cars are left empty, and there’s all these zombies looking for brains.

Anyone who’s somehow slept through the last eight months in Melbourne might equally walk out into a city that feels somewhat similar. Shops, cafés, pubs and breweries are all open but why’s everyone wearing masks and avoiding me on the footpath? On the plus side, at least there aren’t any zombies.

Well, relatively few anyway, with Dainton heralding Melbourne’s return to COVID-normal with the Second Wave NEIPA, Apocalypso II. It follows a similar release in April, back when working from home was still blissfully new to many. This time around, the can art features many familiar images from Lockdown Mark II, including a particularly worn-out Daniel Andrews at the podium.

Like a zombie premier, the beer pours incredibly pale and yellow-hued and anyone who loves a hazy beer packed with tropical fruits will find much to love when going a second round with the apocalypse. There’s a mango flavour that’s so rich it mostly resembles purée, plus rockmelon and peach in a beer that’s fluffy, luscious and all-together drinkable for 8 percent ABV. Just don’t drink too much of it and fall asleep again: you never know what might greet you on the other side...