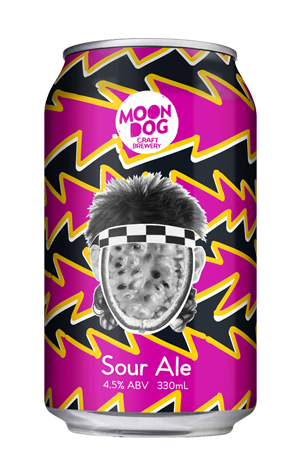 So, which one are they going to run out of first: fruit or celebrity puns? The Magnificent Mullets series from Moon Dog has debuted another new fruit-faced, mulleted star ahead of summer 2020 in the shape of Pat Pash, a sour ale featuring, you guessed it, passionfruit.

There's a fair bit of passionfruit in there too – 4.2 metric tonnes or approximately 150,000 fruits, which, if anything, gives you an idea of the size of Moon Dog's main brewery in Preston. That said, they present rather like passionfruit cordial on the nose, while there's perfume-esque streak in its midst too. As you might expect from the use of such a naturally tart fruit, it's less soft and sour, more sweet and tangy than its predecessors – making more of a racket and puncturing the demure nature of the series to date, just like its namesake clambering over the crowd to the player's box at Wimbledon more than three decades ago. (God, I feel old just typing that...)