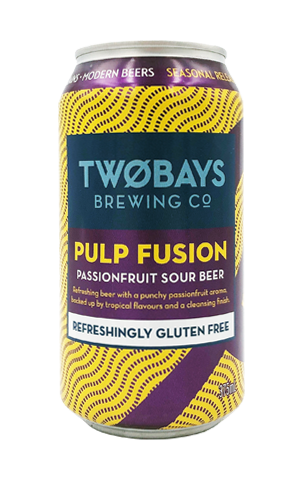 I recall hearing it said many times earlier on in the life of The Crafty Pint: that there was a beer out there for everyone, some people might just not have found theirs yet. The idea was to highlight how much more there was than the Aussie lagers that dominate the nation's consumption habits: fruity, hoppy, dark, sweet, funky. There's only become much more "much more" in the intervening years to the point there are now locally brewed indie beers for those who don't want alcohol and locally brewed pastry beers for those who don't want blood to flow through their arteries past 55. And now there's a sour beer for those who can't have gluten.

TWØBAYS have released the Aussie first ahead of summer – just as Melburnians are set free too – and have a brewer well placed to put such a beer together. Prior to moving to the Dromana brewery, Kristian Martin created a number of lower ABV sours at Mornington Peninsula Brewery, including one featuring passionfruit so, while the grains might be different, Pulp Fusion isn't his first rodeo.

The 3.5 percent ABV sour looks like a witbier, albeit with a fast dissipating head, in which the carbonation in tandem with the acidity from the lactic culture and the tartness of the fruit ensures this fair fizzes on the palate. There's passionfruit and pucker aplenty, it's fruity yet dry, and makes for a successful first for TWØBAYS.